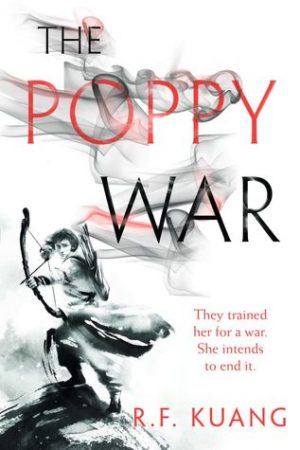 this today is the last review of the week, and also the last book released by oscar mondadori on Tuesday 13th, together with Nona Gray which I will tell you about next week. As I also mentioned yesterday, today’s review will be on the The poppy war by R. F. Kuang.

From the plot you can already understand that it is not one of the usual conventional stories, and while reading you understands that the background story is much deeper than it may seem. The Poppy War is fantastically based on true stories, such as the Song dynasty, and the Second Sino-Chinese War. With a world-building and a detailed map that takes us to the past in a different “china”, very far from freedom.

As one of the characters on the first page also tells us, before the war people also traveled alone without any worries, but now even the soldiers don’t move alone anymore, because the environment is very dangerous. The poppy war is also a raw book, which does not hide violence behind veils and therefore consequently it is not a book that I would recommend to everyone.

Speaking of writing, however, it is quite smooth but there are some scenes that require more time to be read and understood by the reader, scenes with their meaning that like any book of this genre are slower but never heavy. Especially those scenes that contain the main themes of the book that I mentioned earlier.

As the first in an entire trilogy we will have a lot to go through, but I’m sure the characters will make it through their efforts and suffering, and death, and pain, and hardship. I know it may seem very complicated to read just one review but it will be clearer if you decide to read the whole book. It’s a big one, and it certainly takes some time to be read entirely, it’s not one to finish in one go, but in the end it will be worth it. Many would say this is one is a revolutionary books.

Moving on to the plot instead we have Rin who lives a very complicated childhood, and when she is offered a marriage to an old man that she already knows will make her miserable all she tries to do is go away. And the only way she can do that is by studying until her eyes water day and night so she can enter the continent’s most elite school, Sinegard.

And when she passes the test with flying colors, no one believes she really passed it, everyone believes she cheated. But it was all her own work and so she leaves for Nikan’s most prestigious military school. But all she finds here are difficulty after difficulty. Not often someone from the south pass the test, let alone a girl, let alone take the continent’s highest score. She is targeted by her classmates, and it is also thanks to this that over time she discovers that she has a predilection for shamanism.

An interesting thing is that in this school it is not the students who choose their course of study, but the teachers who after one year choose what they think is best based on the skills seen. Rin as I said excels at something. It will be a good and bad adventure for Rin to discover these things. She will have to dig deep into her abilities and it won’t be an easy feat, but it will make her discover things she had disowned all her life.

And I, despite all the nuances of this book, fell in love with it, and can’t wait to find out how it continues, with a rating of 4.5 stars.