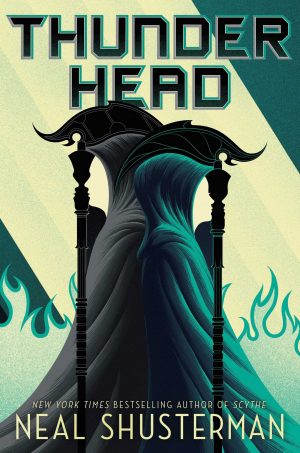 I just put Thunderhead down, not even two minutes ago I turned the last page and all I can think about right now is “what’s going to happen in the third and final volume?”, as always when it comes to sagas my hope is that Oscar soon decides to end this adventure written by Neil Shusterman.

I’ll tell you right away what I didn’t like about this book. The chapters have evolved, the points of view have increased, but they have set aside the events of Citra, and especially Rowan, a bit, which I didn’t particularly appreciate. It must be said that these further points of view in this volume are fundamental because they give a better view of what is happening, leaving nothing unexplained. But Rowan together with Citra should be the two main characters, and instead in this volume they are put a bit on the same level as all the others.

But if we want to consider the plot it was a bomb. We had a lot more details about the scythes and their world, and thanks to the little texts between chapters from the point of view of the Thunderhead we also got to know more about his work. Reading those parts almost made me forget that in reality the Thunderhead is an artificial intelligence, some statements made me think it was human, with a real brain.

As we saw at the end of the first volume, things have changed for everyone. Now Citra is a full-fledged scythe, Madame Anastasia, but she is not well regarded by the other scythes for the decisions she makes. Her modus operandi is to warn the person that she will have to kill a month before, also giving them the right to choose the weapon with which they will be killed. But in doing so she does not reach her quarterly glean quotas and many believe her actions are shameless because it inspires too much fear in people.

But she always has Madame Curie on her side. But these two are in danger, because they will repeatedly try to kill them. I had no idea who it could be, but if someone instructs other people to go and kill other scythes it doesn’t have to lead to anything good, right?

And then there is Rowan who despite not being an official scythe has her mission, to do justice and kill the scythes that kill people for the sheer pleasure of doing it, those who no longer see theirs as work, duty, but as pleasure , as serial killers did in the past – I remind you that scythe is set in a dystopian future in mid-America – with the law on their side. But these actions of his will put him in the spotlight with an old and renowned scythe in his tracks.

They are all in danger, and things, although they hoped would change for the better, have gotten worse. The only thing we readers can do is wait for the third book, the only thing the characters can do is keep fighting.