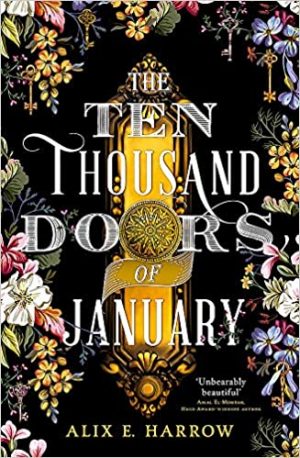 just today another international best seller for Oscar mondadori is out, Ten Thousand Doors of January by Alix E. Harrow, which with its adventures will make you children again, dreamers, will make you live a parallel life that you have never lived except with old fairy tales, yet at the same time it is a hymn not to be subjugated by anyone, and despite what they tell you, not to give up on one’s dreams nor to put aside one’s imagination because others say it’s not good. A hymn to freedom, a sense of adventure, family, and learning from bad choices.

If you asked me to describe the genre of the book, and its prose, I wouldn’t know where to start. I had never read anything like it, full of everything as I said before, with even a hint of romanticism which, although not the dominant theme, is not lacking. A historical fantasy full of magic, because as the title itself says the protagonists of this book are, not so much the characters themselves – January, Jane, Bad, Samuel – as the doors themselves, doors capable of transporting the person to places and times different.

But the real peculiarity of this book is the story within it. A book within a book, because although the title of this is the ten thousand doors, January, our protagonist, finds in an old trunk a book called ten thousand doors, and begins to read it, discovering the story of its own past, of its origin. And the very chapters of this book found by January alternate with those in the first person of January herself who tells the present.

January’s father is always traveling so she is raised by Mr. Locke who raises her as his daughter, but from the first time January discovers the doors all he does is try to change her, to convince her to stop having such a vivid imagination, he even locks her in her room for days with nothing but a bed.

Yet January is tenacious, and will never stop dreaming since that is the only real thing she has left. And the days go by, she grows up, and although she never has a real family around her, over time she makes friends including Jane, sent by her father, Bad a little dog, and Samuel, her childhood friend who knows nothing of the power of the doors but since he was a child he always wanted to stay close to her.

And with them she embarks on what could be a good or a bad adventure, it depends on the point of view. When January realizes the power of doors, after being locked up in a madhouse among other things, she reads the last chapter of the book and realizes that she is more than what Locke has always led her to believe. She begins to travel, even to hide. Her father is missing and now they want her. And after so many difficulties she will find what she was looking for, not without suffering.

This is the typical example of a book whose true potential is not known unless it is read in full first. At first I never expected a story so exciting and different from any other I’ve ever read, original and fresh, with an impact that is rarely found, and for this reason every reader should have it on their reading list. With the readings you make right choices and wrong choices, but this was definitely the right choice, even at the cost of interrupting readings that you have already begun. As rating I give 4.5.