Seasons of the storm by Elle Cosimano 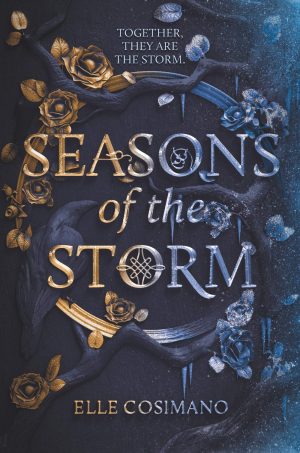 today I’m posting this review a little bit later than usual. Today’s protagonist is Seasons of the storm, a young adult fantasy written by Elle Cosimano. What atracted me the most about this book was the cover more than the plot itself. Plot that, however, is super interesting because I personally have never read a book like that whose protagonists are the seasons themselves, people who have been chosen to carry out this task in different parts of the world.

Have you ever thought of the seasons as people, teenagers, with this task? Yet this story is very realistic however realistic it can become for the simple fact that the seasons kill each other, summer kills spring, spring kills winter and so on, and the longer they manage to stay alive the more they rise in the rankings and the more they have the chance to continue to exist.

And that’s a bit like what happens in the world with real seasons, isn’t it? Each year the seasons have a different length. For example, autumn has officially entered for a month now, but still the leaves from the trees have not even fallen and the cold is starting to arrive only in these days.

The protagonists of Seasons of the storm are Jack, Fleur, Julio and Amber, respectively Winter, Spring, Summer and Autumn. They were chosen to represent the seasons, to save themselves from the death they were going against, by Gaia and Cronos. And they have lived many years without problems. The book begins by showing us how Jack became a winter.

But the rules are strict for everyone, especially Jack who over the years has fallen in love with Fleur and Julio with Amber, but it is forbidden. Touching another season is prohibited, for reasons no one knows yet. But Fleur is in danger because her score has dropped too much and the only thing Jack can think about, even after his promotion, is to find a solution to save her, and save them all.

He thus convinces the others to follow him in this adventure that could kill them all, yet they follow him, but almost immediately things start to get bad. Their supervisors are not like them, and once in contact with the outside world they begin to get sick. And the dangers are always there because Cronos’ guards chase them without stopping.

I didn’t think so much would happen in 500 pages and yet it does. The guys try to escape without ever being able to outrun their pursuers, and when they think they are safe they find that a person they thought was helping them instead deceived them from the beginning.

You will arrive at the end holding your breath because the writing drags you with it, alternating the POVs between Jack and Fleur. In the last 50 pages, I no longer knew what to expect. Seasons of the storm was a great adventure. I don’t know how many books there will still be in this saga, but the second one has already been announced and there has already been the cover reveal in theme with the first and I can’t wait. I highly recommend it. I don’t give it 5 stars but 4.5 for sure yes!