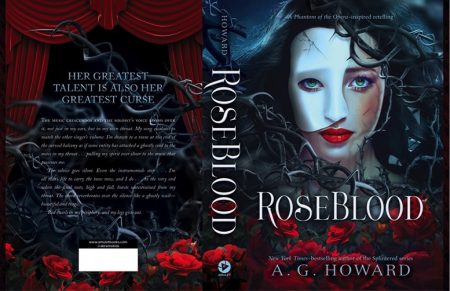 Good morning Books Lovers and happy 2021 to all, may it be a prosperous year full of good things to outclass the negative things in the world.

December was the first month of the Books Lovers Book Club, an international reading group for which I use this post as an invitation to ask you to participate, just let me know and I will immediately add you to our group, the January book is already been decided it will be Matched.

I thought it was nice to start the reviews of the new year with that of a book read and discussed with other avid readers. Roseblood is a book that has been in my library along with the other A. G. Howard trilogy for a few years now and I finally had the chance, or rather the excuse, to read it.

Roseblood is actually a retelling of The Phantom of the Opera and in the story there is also the ghost itself. One difference that I found with Splintered, which I devoured and loved madly, was the romantic factor that is more present in that story and here it was more put aside.

But all in all, and despite the diversity with my expectations, it was a very interesting story set in an Elite music school where Rune is sent to, among many reasons, cultivate her great vocation for music.

But the truth is that Rune has this calling because she was passed down to her by her father’s family, and it may be a good thing but it may not. Later in the book this vocation of theirs is referred to as “vampirism” because of the energy that is absorbed by a body each time it is exercised.

Rune herself after the death of her father was no longer able to sing without hurting herself. And she now ended up in this academy where in the darkness hides the phantom of the opera and the one who is his adopted son to say so, Thorn.

The ghost needs Rune, but Thorn doesn’t want to go ahead with the plan, and between chapters from both guys point of view we’ll come to the end with bated breath. We will arrive at the Halloween party without knowing what to expect anymore because it will be at that moment that the ghost will reveal itself.

There is no denying the prose, as smooth as ever, and the fact that as stand-alone helps a lot for those who would like to face a simple and exciting reading.