Capturing the Devil by Kerri Maniscalco 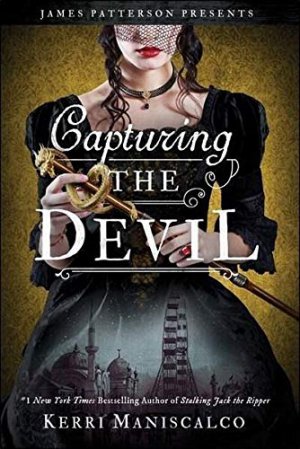 As you may remember Capturing the Devil was one of the 4 books in my December TBR, well, of those 4 in December I only read 2 and a half, but come on it was more than half. I finished reading Capturing the Devil, fourth and last book of the investigative saga with Audrey Rose and Thomas by Kerri Maniscalco, just two days ago, it was practically my first book of this 2021 and all in all I could say is that I started well this New Year.

One of the beauties of this saga lies precisely in Women Empowerment, we are in the 1800s where women still could not do anything but gossip with other girls and marry young, yet Audrey Rose with her aptitude for forensic studies and her qualities, her stubbornness, she manages to do what in those days would never have been possible thanks to her uncle who believes in her. A real badass who is not afraid of anything, apart from a few moments of emotional breakdown that on certain occasions was inevitable.

We all know that over the years things have changed, women have been able to have an appropriate education, do any job, with the aim of being treated on an equal footing with men. I personally have always aspired to do a job that once women could not even get close to, but it was the same for writing even further back in the years, today we have made a lot of progress even if many are still to be done.

But in reality if I have to be 100% honest the real reason that prompted me to read this saga was the great presence of real historical details used by Maniscalco. You can see all the research behind it. Precisely in this regard at the end of each volume the author has added a note, but particularly in this book because the longest and most detailed note is in this. You also hint at some anecdotes from the three previous volumes and in this too the historical details were the prevailing ones, perfectly blended with the invented parts. But in this volume she also revealed that she based Audrey Rose on her with her passions, and her ailments, all realistic at best.

But returning to the plot, we had finished the third volume, Escaping from Houdini, with Audrey Rose, Thomas and Jonathan Wadsworth landed in New York from the RS Etruria to follow a case for which Audrey Rose’s uncle had been requested, but arrived the shocking revelations strike our protagonists. Apparently Jack the Ripper is not dead as we thought, but he moved to New York to continue his work, and from there he will later move to another city where our charatchers will follow him to finally discover his identity.

We all thought the figure of him had died with Nathaniel but consulting his old notebooks Audrey and Thomas will discover that in reality it was never Nate who committed the murders but an accomplice of his who has now resumed killing defenseless young women again.

But this is not the only problem to face, because if you remember Thomas had made the proposal to Audrey Rose that she had accepted and now they are ready to get married after the blessing of her father and all the most important family members gathered in the same place, but I’m sorry to say, even though I had expected it during the reading, the marriage is sabotaged by Thomas’s father.

So apart from a serial killer on the loose on the streets of New York there is also Lord Cresswell who does not seem to be part of the group of good guys in this story. But on this front, after so much despair and tears, the two will receive a lot of help, even of a royal nature, to live happily ever after one day.

I will not give 5 stars to this book though. And you are probably wondering why since I have only spoken well about it so far. And I’ll tell you why right away. In this volume I found the investigative part, due to the marriage and sentimental involvement – it was about time – between the two characters, a little neglected in the first half of the book. All eyes were on preparing for the wedding and once sabotaged on how to resolve. The ripper problem was always there but no one but the uncle was giving it much weight, even more so. It was only later, once they changed city, driven by having to leave New York to prevent Thomas from leaving with his father for London, that the investigative part was fully resumed, becoming the focus of the rest of the book.

Lately I have seen people around who said they did not particularly appreciate this saga for one reason or another, including it among the worst books released last year, but instead I liked it a lot, in fact I included it among my best books of 2020, so at this point, at the end of what is probably the longest review I have ever written, I can not help but fully recommend it, it is not stratospheric but I tell you the truth, if I were to reread it I would do it very willingly, I will never stop loving Audrey Rose and Thomas , even if in this last volume I noticed a change in Thomas’s personality, I don’t know how to explain it but I noticed some differences from how he was before declaring his love, all in all, all is well what ends well.