The Rules of Enchantment by Wendy Tardieu 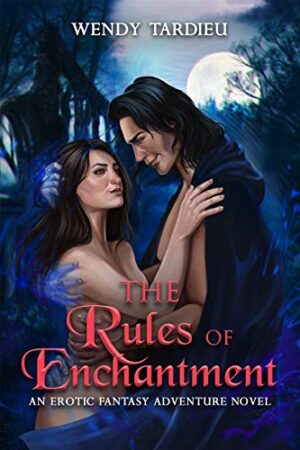 and here after a year that it was sent to me, I also read The Rules of Enchantment by Wendy Tardieu. This book is an adult, fantasy, rather short, about 150 pages. Thanks to the editor for the copy, TCK Publishing, and with that said, let’s dive into this short review. Short book, short review. I already don’t know if I’ll be able to keep spoilers for myself.

I will tell you, I liked the story in itself a lot, but the events in my opinion were rushed. The days, in the narrative, pass quickly. Kyler, our protagonist, approaches Leith too quickly, so much so that it doesn’t give that extra to the story for the hasty narration.

For the plot I prefer to leave you the official one. I’m trying very hard to avoid spoilers. It is a very short book, and for this reason its story is all to be read in first person. I will tell you though, one thing that has troubled me since the beginning of the book is that Leith’s age is never indicated. For some weird reason I thought he was an old man at first, but when he and Kyler started getting closer, I knew it couldn’t be. Don’t be fooled like me if you ever read it. At points like these, the narrative is not so clear.

In the mythical kingdom of Salyndria, an exiled sorcerer named Leith plots to overthrow the restrictions placed on the use of magic by the Academy. Suspecting the worst, the Academy sends a beautiful young scribe, Kyler, to be his apprentice and act as an unwitting spy.

Leith tries to drive her away by proving his reputation as a vicious and unforgiving master, but he soon discovers his new pupil is far more useful than she appears. As her charms and magical abilities become all too tempting for him to resist, the two join forces to fulfill a hidden prophecy that will grant them incredible power.

Together, the sorcerer and the scribe will change Salyndria’s history forever.

Their story is equally sinister and sensual, a romantic dark fantasy adventure full of suspense and surprises.