We own the sky by Luke Allnutt 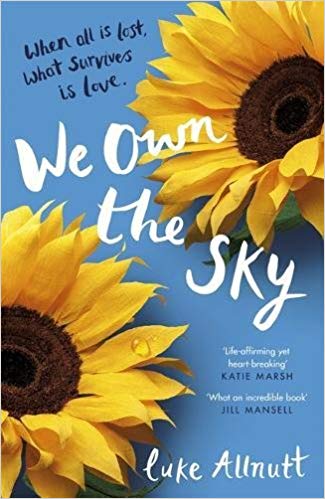 it’s time for reviewing this book, We own the sky by Luke Allnutt.

As always, I will be absolutely honest in the review, so I will not leave out anything, good or bad.

Let’s start talking about the plot (the good part). Luke Allnutt wanted to try to convey his feelings about a very delicate subject. To Jack, the son of the protagonists, is diagnosed at an early age a cancer, which apparently can be treated easily, but it is right after this first surgery that things get complicated, bringing the story to a tragic and touching end.

From the point of view of the story this book is phenomenal, touching, and it is truly a story not to be missed, a must-read one, because it makes you think a lot, even with regard to the topics covered by the stages of Blogtour (Which is in italian).

But this books has a flaw. Despite well-written characters, well-defined history, Luke Allnutt’s writing is slow, sometimes I dare to say heavy, and this makes it more difficult to read this book that already takes time in itself to really understand the meaning of the story. For me, some elements in the narration could have been removed to make everything smoother. It took myself some time to read it, and I honestly did not expect it so, so it conditioned a bit my final judgment, but after reading it I can say that despite the slow narrative and the time that it took me to finish it, it was worth it to get to the end and see how the story ends.

I also leave the plot so you can take a look at the specifics of what the book is about.

A story about love, loss and finding hope – against all odds.
Rob Coates can’t believe his luck. There is Anna, his incredible wife, and most precious of all, Jack, their son, who makes every day an extraordinary adventure. Rob feels like he’s won the lottery of life. Or rather – he did. Until the day it all changes when Anna becomes convinced there is something wrong with Jack.
Now Rob sleepwalks through his days, unable to bridge the gulf that separates him from his wife, his son and the business of living. But he’s determined to come to terms with what’s happened-and find a way back to life, and forgiveness.
We Own the Sky will resonate with anyone who has ever suffered loss or experienced great love. Luke Allnutt shows that the journey from hope to despair and back is never as simple as we think, and that even the most thoroughly broken heart can learn to beat again.

My rating would be three and a half stars, all because of the narrative, because otherwise the story itself would deserve five and not three stars.