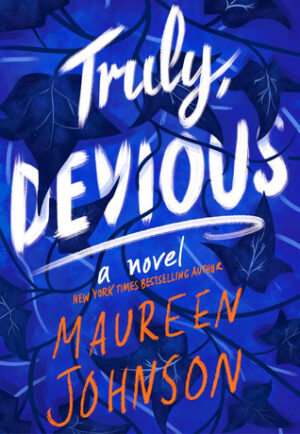 for those who follow me on instagram knows that in the past few days I have launched various polls in my stories to make you decide what my future readings would be. Out of 8 initial books, four remained. I very much appreciate the great response from you in the votes. Of these 4 books I should have read only two, always chosen by the polls, but in the end I decided that I would have read all four in order of votes. The books chosen were, in order, Cinder by Marissa Meyer, Truly Devious by Maureen Johnson, Ash princess by Laura Sebastien and The Vanishing Throne by Elizabeth May.

Last week I posted Marissa Meyer’s review of Cinder, a title I gave 5 stars to. Today instead I will talk about Truly, Devious, the first book of a trilogy written by Maureen Johnson that we have often seen in collaboration with Cassie Clare in the Shadowhunters Chronicles books.

Truly, Devious, published in Italy by Harper Collins (this post is not sponsored by the publisher) is very different from the other three of the Summer TBR. It is not fantasy, but it can be part of the mystery, the thriller, and obviously the Young Adult genres. The protagonist is Stevie Bell, a 16/17 year old girl, super passionate about crimes, how to solve them, understand all the dynamics behind them, with the dream of one day working for the FBI. Her school does not give her any stimulus so she decides to send an application to enroll in Ellingham academy, a school that covers the last two years of high school, open to the most particular children.

But Stevie’s real goal is to unravel the mystery of the Ellingham family. Mr. Ellingham was very rich when he decided to open the school, but around the same time his wife and his daughter were kidnapped and killed. Even though one person eventually turned up, Stevie believes that further investigation is needed for the mystery to be solved.

Things in recent months, however, go much further. Aside from having to follow the lessons and get used to this new life, living in a house with 5 other teens, 3 older and two her age, about halfway through the book the real mystery comes to the surface. A companion of her dies and here it is necessary to understand who did it and why.

As I wrote in Goodreads updates, and Instagram stories, this story didn’t particularly impress me. The beginning was complicated because two or more new characters were added to each page, ending up confusing me and slowing me down because when they talked I didn’t know who they were. We have Stevie, Janelle, Nate, David, Allie, Hayes, Vi, Pix, Charles, Security Lerry, Germaine and others that I can’t even remember at the moment. You can imagine that, having revealed all the names in the beginning, it was more difficult to follow the story and remember who is who.

Let’s say this was the biggest drawback for me. Then another thing that I did not particularly like was the fact that, up to the middle of the book, that is, the moment I told you someone dies, nothing in particular happens, and several times I thought of interrupting the reading to move on to next book, but in the end I braced myself and finished it. I also told myself, at some point, that I would not complete the reading of this trilogy. But yesterday, coming to the last sentence, my idea changed. There is one thing David says that made me reevaluate my decision. I will not read the second volume in a short time, but maybe one day I will, as opposed to the never that I had told myself before. In the end, however, I do not feel like giving more than 3 stars to this book, I hope that maybe the second one will be better now that we have become familiar with some characters and the story.