The Hawkweed Legacy by Irena Brignull 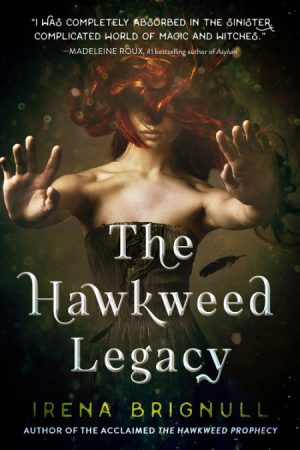 Today I talk about Irena Brignull’s The Hawkweed Legacy, sequel to the Hawkweed Prophecy.

If I had given four stars to the first volume, this has been worth even less. First of all, before starting to talk to you properly, I leave the plot to which you can reconnect many things.

Poppy is discovering a purpose for her powers in Africa, but she is haunted by a vision of her own death. Taken in by a boy and his great-grandmother, a healer, they vow to keep her safe-even if that ultimately means holding her captive. But Poppy never stops longing for Leo and, when she feels his magic begin to spark, she will do anything to be reunited with him.
Desperate to regain Poppy’s trust and bring her home, Charlock embarks on a plan to reunite Leo with his mother. What Charlock doesn’t foresee are the string of consequences that she sets into motion that leave Ember all alone and prey to manipulation, the clan open to attack from other witches, Sorrel vulnerable to Raven’s ghost, Betony determined to protect her son from his father’s fate, and which leave both Leo and Poppy in terrible danger.

For more than the first half of the book the story was very, very slow. In the first volume there was a little more adventure, but in this the author stopped at the life of the characters for most of the chapters. Poppy, as the plot says, is in a lost country and does not return before the middle of the book. But what really confused me a lot, even though fortunately they were in third person, were the POVs of every single character. Eight characters had their chapters, told from their point of view. But the confusing thing was not so much this as Betony’s POVs, a new character, and the chapters centered in the past of Charlock and Betony.

In itself the story was not so bad, especially the ending that surprised me a lot, but there were concepts that by me, if read by children too young could convey the wrong message. Witches send the younger ones, those who want to become mothers, at 17, in the city to find a boy and get pregnant, because they have reached the right age. Of course, this is a book, a story of fantasy and I don’t doubt it, however, in my opinion, and I’m 17 years, if read by the wrong people, who do not capture the fact is fantasy, could make a wrong idea and stop even to read the book by itself.

Now that I have finished the review I realize I have criticized it enough :|, but as always I repeat that my judgment is subjective, so if you want to get your own idea the only thing you can do is to read it.