The betrothed by Kiera Cass 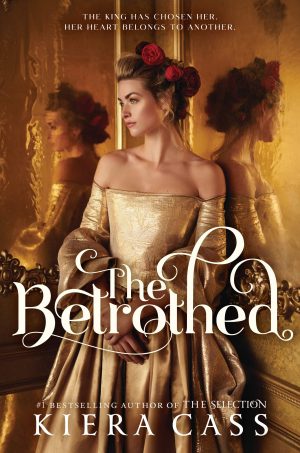 Have you ever heard of Kiera Cass’s The selection series released years ago for Sperling & Kupfer, of which a film is currently being developed for Netflix, after an attempt was made to make a TV series that was only canceled after the pilot years ago.

I have to tell the truth, in terms of evaluation, I have never struggled so much as now. This book has its positive and negative sides, yet if I think about the 3-star rating it seems to me too few, 4 seem too many, yet 3.5 does not seem to me to give justice to the story, yet having to find a compromise I think it is the right choice .

Our protagonist Hollis lives at court, comes from a noble family and could be the lucky girl who will attract the attention of the King. King Jameson is young and needs a wife and among all the court maidens it is Hollis who after a funny case completely grabs his attention like never before.

And that’s where the courtship begins, and Hollis thinks she’s falling in love, but as the plot tells us too, so no spoilers here, everything changes when Silas arrives with his family at court. They are seeking refuge because in their kingdom, under King Quinten, they are no longer safe. And also thanks to Hollis that the king grants asylum to newcomers.

But already from the first glance with Silas Hollis sees something different in him that she doesn’t see in Jameson, and the feeling is reciprocated. Little by little the two approach and Hollis realizes that what she really wants is the true love she doesn’t have with the king, and even if she will disappoint everyone, she doesn’t want to live her whole life in discontent, as an object and not as a person. Because even though Jameson has always treated her best he doesn’t see her as his equal and some of his words make Hollis understand that that’s not what she wants.

A lot happens in this very short book to read in one go. As I said before, however, it has its pros and cons. Among the cons those who have also read The Selection could see too much similarity between the two stories, I don’t see it because I have only read this, but a cons for me was the choice to write such a tragic ending in which I did not see a lot of sense and I’m very excited to know what’s going to happen in the second volume. A little bit has been given, not so much by Hollis’ tenacity – because there are actually too many tears in this book – as by the story itself that thinking about everything I know of the times when kings ruled is very realistic.

I hope the second volume turn out to be far better because I really can’t wait to find out what Hollis has in mind. But my curiosity also concerns her future in love, who knows who will be?