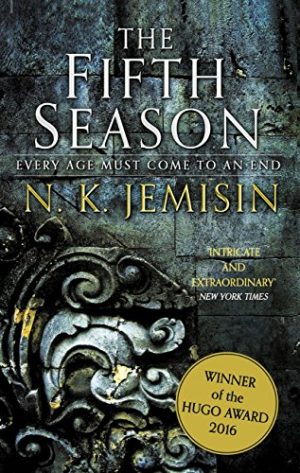 How are you Books Lovers?

I am not the first, nor will I be the last to talk to you about this book that you have probably already seen around, because from the date of its release, even before, it has done nothing but to populate social media and the web. The fifth season of N. K. Jemisin caused a sensation, published by Oscar mondadori who really found the perfect book for everyone.

The fifth season is a fantasy, but despite the fantasy notes it is a book in which three female figures stand out, I repeat three female figures. It is not men who have the scene in this book. And yes, we now have books that show us strong and tenacious women, but you never have enough.

Up to now I have not heard anyone saying bad things of this book, and I will certainly not be going in an opposite direction. The fifth season tells a particular story one could say, and although we are in a fantasy world, created by the author, many current elements are found throughout the book.

However, the narration is not the easiest. The fifth season is not a book that can be read in one breath, it must be savored in the right time. It took me a while to read it myself. The story of these three women is a story that must be understood thoroughly, and to be able to do it you must pay close attention to the reading, the details and the world in which we find ourselves. The story itself is told in two different ways. The chapters of Syenite and Damaya are told in the third person, but the story of Essun is told in a way I had never seen. It is as if the narrator is speaking directly to the reader, and the reader is actually Nassun, almost as if she were telling us what she has done in a certain period of time.

As you may have understood, our protagonists are Essun, Syenite and Damaya. They don’t know each other, the only things they have in common are their tenacity and orogenity, a particular ability much feared in their world. The streets of these characters are separate, each has its own task, its role to play in this story, its life, but none of them have real freedom.

I can’t help but love all three and can’t wait to read The obelisk gate, however my preference during the book has changed. Halfway through, my favorite protagonist was Syenite, but afterwards I loved Damaya wholeheartedly. Damaya is the smallest, and at the same time the most courageous, because at that tender age she manages to keep up with everything and make her way quickly.

I only give you some advice for reading, if you start this book don’t stop. I know that in some places it could be a bit heavy, but keep reading until the end, it will all be gained. And then this is only the first book of the trilogy, so the best I think is yet to come.

In a prologue, an extraordinarily powerful orogene discusses the sad state of the world and laments the oppression of his race. He then uses his enormous power to fracture the entire continent along its length, threatening to cause the worst Fifth Season in recorded history. The story then follows three female orogenes across the Stillness from different time periods: Essun, Damaya, and Syenite.