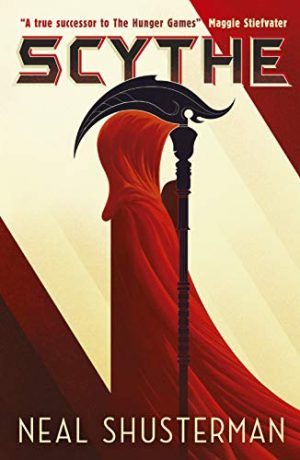 While reading scythe I found myself connecting it to many movies, books and TV series for the dystopian way society is described, okay that death was defeated, but at least in our time we know is inevitable and we do not spend every day of our life thinking that one day we will die, in Scythe they are more afraid of it in a manner of speaking. It is the task of the Scythes to take people’s lives to keep the number of inhabitants of the world stable, and so when someone sees a Scythe they know their time has come.

While reading I was also watching a tv series on amazon prime, which I finished in less than 24 hours by the way XD, and I found myself comparing a lot of Scythe with Upload. Which by the way will be the next series that I will recommend so follow the blog to read the post as soon as it will go online. I compared them, I think, to the fact that people’s lives, in both, are dominated by technology in one way or another.

In Scythe, suicides no longer exist, natural death no longer exists. If one tries to kill himself an ambulance drone will immediately bring him to the hospital and back on his feet in a few days. Death is now only the task of the scythes, but not everyone does this job for the same reason, some do it because someone should do it, but others do it for fame and pure fun in killing people. It was 2042 that death had been defeated, when technology had literally made great strides. Even the years are not counted anymore. Initially, the Chinese calendar had started to be used, but once finished, people started to propose new animals. Scythe’s narration takes place during the year of the leopard.

Speaking of our protagonists instead we have Citra and Rowan, both, although young, very courageous, tenacious, able to cope with scythes, despite the awareness of what they could do to them.The two guys do not know each other, but following a meeting with master Faraday they are chosen to become scythe apprentices, and at the end of the year of apprenticeship only one of them will receive the ring and be named scythe, the other will have to return to the old life. They are trained in the art of the Bokator, they are taught every classification of poisons, how to use weapons.

But their apprenticeship will not be linear, far from it. It will be a long and difficult year, and even when they think things can be solved, they get worse. They will pass a separate period, never forgetting each other, and never forgetting that whatever happens to them they will always remain themselves. And then I suspect that we will still see some beautiful things in the next two books. Everything is still to be discovered.

I really liked the writing, which perhaps was not even wanted by the author, the fact that at the beginning the chapters are shorter, then they gradually lengthen, obviously without a logical scheme, and towards the end they go shortening again, as if to follow the cadence of the book, more pressing towards the center where things became more interesting and calmer at the beginning and at the end.