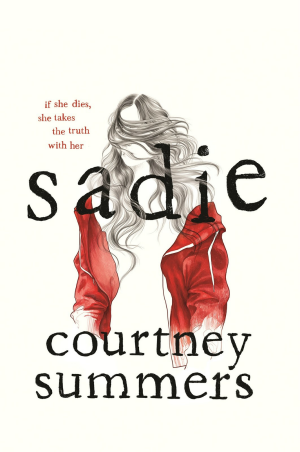 today it’s Sadie’s turn, written by Courtney Summers. Thanks Rizzoli for the copy.

I will speak to you immediately about one of the peculiarities of this book. Aside from the plot, of course, the chapter structure must be taken into consideration, because in this book we have two types. Sadie’s chapters are narrated in first person by her, but the chapters of Mr. McCray, a journalist who investigates the murders and disappearances of boys, are narrated as if they were podcasts reporting thoughts, phone calls and considerations of Mr. McCray himself. It is therefore easy to imagine all the characters in the mind even if in reality we do not have physical descriptions, but the fact that they are the first to speak makes us understand them better.

And then there is the plot, and I feel like saying that this book, like On the come up by Angie Thomas, also reflects the reality of our days very much. In this case I prefer to leave you the plot, because with a book like this it would be very easy to make unwanted spoilers without realizing it, the plot is so thick and full of details and stories, a logical thread that connects the whole story.

Sadie hasn’t had an easy life. Growing up on her own, she’s been raising her sister Mattie in an isolated small town, trying her best to provide a normal life and keep their heads above water. But when Mattie is found dead, Sadie’s entire world crumbles. After a somewhat botched police investigation, Sadie is determined to bring her sister’s killer to justice and hits the road following a few meager clues to find him. When West McCraya radio personality working on a segment about small, forgotten towns in Americaoverhears Sadie’s story at a local gas station, he becomes obsessed with finding the missing girl. He starts his own podcast as he tracks Sadie’s journey, trying to figure out what happened, hoping to find her before it’s too late. Courtney Summers has written the breakout book of her career. Sadie is propulsive and harrowing and will keep you riveted until the last page.

If you like Thrillers this is the perfect book for you, but I want to point out that Sadie is a raw, direct book, which will reach your heart and mind in different ways, but it is still a book that should be read, because also this is a mirror of the negative reality of our world.