Luna: the trilogy by Ian McDonald 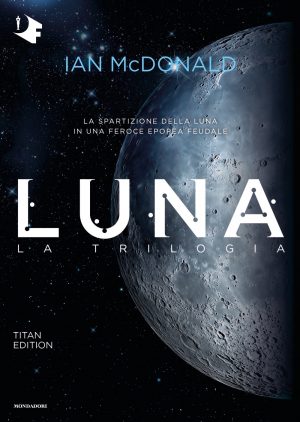 how are your readings proceeding? I am trying to read as much as possible as long as I can, this year I am on exams and therefore already when it is mid-April my time available for reading will begin halved, always hoping that this coronavirus problem will be solved.

I am having very pleasant readings in this period, I think I am choosing them well … one that, however, I did not love as I would have liked, but that I appreciated equally enough, is today’s one. This book was released on July 16 for Oscar Vault in a beautiful flexible edition containing an entire trilogy, I’m talking about Moon: the trilogy – composed of new Moon, wolf Moon and Moon rising – books written by Ian McDonald respectively in 2015, 2017 and 2017, not far from today in short.

This is a Sci-fi trilogy which, as can also be deduced from the title, is set precisely on the Moon in 2110. Some powerful families decided that they had to take this step, among them the Corta, Brazilians, our real protagonists, those who will accompany us for all three volumes.

Before I said that this was not one of my best reads, but with this I did not want to assume that they are not good books, on the contrary … I liked a lot the history of the lunar colonization , what I did not like were the somewhat slow scenes, and some chapters perhaps a little too reflective of the first book. But I want to talk to you about the three books separately, with short, spoiler free, reviews of course.

The book had started off very well, but then it started to get lost a bit, and then again it went back to being exciting. Reading New Moon was a bit like being on a roller coaster of reading.

The fact that it has so many characters does not help, it is difficult to remember them all, even if the Corta remain immediately in mind. Another flaw is the scenes too short, they could contain more.

Although it shows us a possible, which also seems very realistic, future, in which we will not be able to do anything without the machines, not even counting. Everything comes very close to today’s reality and this is precisely the most fascinating and at the same time frightening thing.

However, despite the technological advancement, they still seem to use an archaic method to relate. The people who are worth something are those belonging to powerful families, and marry each other to preserve that same power.

As I said before, if it weren’t for those little downsides it would have been a crazy read, but luckily something, in terms of storytelling, will change in the second book.

The second picks up where the first one left off, and has a good start in every sense. I promised not to do spoilers so I will just say that the Corta family has not had one of the best endings, after all when there is the power in the middle everyone wants it for different reasons.

This volume has the same pressing rhythm as the first, but while I was reading, probably because I was in the mood of the story, or because something has changed, it seemed more flowing and much more interesting. This does not mean that there was some slow scene here and there, but in the end, let’s face it, which good book doesn’t have a slow scene in the end?

The same chapter heading is different. In the first the beginning of the chapter was represented by a simple Arabic number, in this instead the chapters also have a title.

We also have the opportunity to explore the life of some characters who had been little seen in the first book. Together with the old characters, new ones come together, yes, the names keep increasing, but those that really matter will remain in your head, it is only a little difficult to connect the relationships, but trust me, this will be the least of your problems if you will decide to immerse yourself in this reading.

For this last volume I can only tell you that it concludes an epic trilogy, even if it has had its ups and downs. As narration it is a mix between the first and the second, the headings of the chapters return as in the first book … and as always the myriad of characters does not help, but all have their precise role in the story and Moon would not have been the same without them.

I advise you to put, as you will certainly have done in the second volume, your attention to Lucas and the remaining Corta. A 3.5-star book, of which I will not say more … if you want to know more, immerse yourself in this 900-page reading, and then we will talk about it together.

At this point I can only wish you to enjoy your reading.

P.S. sorry that i left the italian cover, but couldn’t find one for the whole trilogy.

To the all book i give: