Him by Elle Kennedy & Sarina Bowen 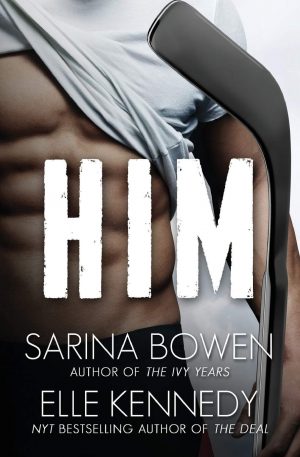 today I want to talk to you about a little gem published by Always publishing. These Him by Elle Kennedy and Sarina Bowen.

Being a romance there would be a lot to tell you, but at the same time I just want to intrigue you because Him tells a story that must be read firsthand. I predict that the leading couple is a gay couple, which I loved madly. Wes and Jamie are super tender; they look great together; and it’s that couple who makes your heart melt every time.

This is another of Elle Kennedy’s masterpieces, and if you read the last review on this author you will have seen that I did not like it, but between that and this there is absolutely no comparison. I devoured and loved this, and am waiting for the sequel.

Wes has always known he was gay, or rather he understood it as a boy and kept it hidden only from the press because of his career. Jamie never knew it, and still doesn’t know. The fact is that Jamie and Wes were best friends, who attended the same Hockey summer camp every year, but then for a stupid game, as it almost always happens, Wes moved away and the two no longer had any contact with each other.

If anything, they then meet again as professional players in a match with their respective teams. They both realize that they miss the old days together, Wes most of all since it was his fault that they walked away. So they try to re-establish relationships and it’s not that difficult because their friendship had never disappeared.

From here, however, they begin to approach as more than friends, Jamie’s unexplored field, and from here the true, enthusiastic story of the two boys begins, and it will be great to see how things will end between the two of them. Jamie and Wes are one of those couples who remain in your heart forever and it is precisely for this reason that it is worth reading their story to the end, amidst problems, disappointments and much more.

Meanwhile, I look forward to the sequel. Always publishing hurry up.