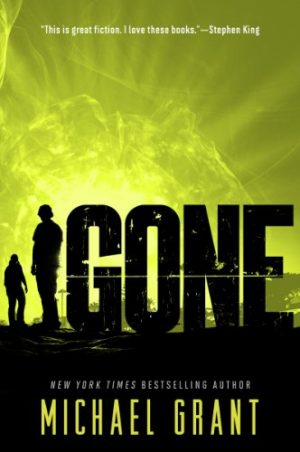 And to continue the roundup of 5-star reviews, Books Lovers, today I’m talking about Michael Grant’s Gone published by Rizzoli whom I thank for the copy.

I must immediately say that the similarity that this book has with the TV series The Society, the last one I told you about, is impressive. In this regard, when I started to notice certain similar details, I wanted to do some research, but in reality TV series and book are two completely different things, which however are almost the same, apart from the age of the characters. In the TV series all the adults have disappeared, and in the book instead all those over the age of 15 have disappeared, and as they turn 16, for an inexplicable reason that is introduced at the end of the book and I hope it will be deepened in Hunger, according to book already out, continue to disappear.

I also noticed some details similar to Stephen King’s The dome, which also left the comment that is reported on the back cover of the book, but these are however irrelevant details one could say for the dystopian worlds that Grant and King created.

As for the characters, we really have a lot of them, each covering his role, all different from the others. I speak to you of the most important. However, Grant’s mastery also lies in having been able to tie so many different stories together, without clashing or confusing the reader while reading. Of course, it will take a while to learn all the names, but you will end up loving all the characters, and certainly hating many, very soon, even before being able to recognize them for their name.

We have Sam Temple, our main protagonist, the one who will do great things, but who will equally leave room for everyone else. We have Astrid the genius, probably the smartest girl of all, and her 4-year-old brother Pete, autistic with immense power that obviously, due to his condition, and his age he cannot control. There is Quinn, Sam’s best friend, but throughout the book he will take on different attitudes towards his friends. Edilio, the handyman can be said, and the one who quickly learns to adapt. In Perdido Beach, California city where the book is set, we still have Mary Terrafino, Dahra, Albert, who will take on very important roles to help the community, and then there is Orc, the school bully who will remain a bully until the end.

And then we have the guys from the Coates Academy, most with powers. The strongest is Caine, who together with Sam will be at the center of the whole story, Diana, Drake, Computer Jack and many others. And then there is Lana, who for most of the book will find herself alone, fighting for her life together with her dog Patrick, experimenting with her powers at the expense of her life and doing everything to stay alive and find out what happened. In my opinion she is one of the most curious characters to discover because, as mentioned above, she will always be alone, so we will discover that she is really a very brave girl who does not give up.

For the rest I leave the plot, and in the meantime I throw myself in my other readings, hoping to soon be able to start the second, because in September Rizzoli should resume with publishing the others of this saga.

Suddenly there are no adults, no answers. What would you do? In the blink of an eye, the world changes. The adults vanish without a trace, and those left must do all they can to survive. But everyone’s idea of survival is different. Some look after themselves, some look after others, and some will do anything for power …Even kill. For Sam and Astrid, it is a race against time as they try to solve the questions that now dominate their lives …What is the mysterious wall that has encircled the town of Perdido Beach and trapped everyone within? Why have some kids developed strange powers? And can they defeat Caine and his gang of bullies before they turn fifteen and disappear too? It isn’t until the world collapses around you that you find out what kind of person you really are. A chilling portrayal of a world with no rules. When life as you know it ends at 15, everything changes.