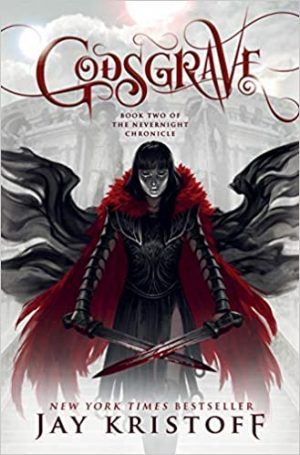 for this second review party dedicated to the second volume of the Nevernight trilogy, Godsgrave of Jay Kristoff published by Oscar Mondadori in Italy.

This second book in just a few words will take your heart and do it in a thousand pieces. Then he will trample on it, eat it and spill it; and when you think you’ve finished suffering, he will feed it to the sand craken to make him finish the job. In short, to make you understand better, this is not the right book for you if you are emotional and violence is not your thing. Because in this book not only physical violence is disseminated but also mental manipulation towards the characters and towards the readers themselves.

Don’t start boldly by saying that you are not the types who suffer with a book. I assure you that in front of this story even the toughest have yielded. And despite everything though, even if I still have to complete the reading of the third one, for now my favorite of the trilogy is just this, Godsgrave.

Mia is more determined than ever to get her revenge and embarks on a journey that will confuse you a little at the beginning of the book, but the work of the italicized parts, which are not real flashbacks, and which I love, is really to make you understand why the choices of our protagonist and her companions.

In this volume more than the first in my opinion, no less than two stories are told. The italicized and normal parts are connected, yet they seemed two completely different and at the same time exciting and, to say the least, beautiful books. At each chapter I had to continue to resume the history of the past before returning to the present. It had almost become a must during my reading until they are finished, because as in the first book, once they get to the same point in the beginning of the current story they end.

And in spite of everything, the story continued with a pressing rhythm, full of suspense, expectations, joy, and then went into tragedies, difficulties, and the most difficult parts to conceive. Mia’s mind is amazing, her way of conceiving plans and finding solutions at the moment is incomparable. And even though in her life she has lost and continues to lose people to whom she cares a lot, she always remains with her head held high with her gaze fixed on her goal, revenge, which is now the only concrete thing she has left.

But underneath all this there is much more, and to find out you will have to read the books because nothing else will help you to fill your curiosity if not the books themselves that I wish would never end.

Whenever I have to write a review for Nevernight, as well as for the first book, I would like to tell you a lot more, to talk more about these stories that also have a bit of truth also in terms of government etc., but I can never because if I do I’ll end up telling you the whole book. What I can tell you for sure is that I would reread this trilogy a hundred times without ever getting tired. And the best part is that Mondadori has announced that they have bought the rights to Aurora Rising so next year we will have other books by Kristoff <3 I look forward to 2019. I just hope that they decide to translate Lifelike too, given that already Oscar Mondadori has announced that it will bring another Kristoff series to Italy soon.

In a land where three suns almost never set, a ruthless assassin continues her quest for vengeance against the powers who destroyed her family.

Mia Corvere has found her place among the Blades of Our Lady of Blessed Murder, but many in the Red Church hierarchy think shes far from earned it. Plying her bloody trade in a backwater of the Republic, shes no closer to ending the men who destroyed her familia; in fact, shes told directly that Consul Scaeva is off limits. But after a deadly confrontation with an old enemy, Mia’s suspicions about the Red Churchs true motives begin to grow.

When its announced that Scaeva will be making a rare public appearance at the conclusion of the grand games in Godsgrave, Mia defies the Church and sells herself to a gladiatorial collegium for a chance to finally end him. Upon the sands of the arena, Mia finds new allies, bitter rivals, and more questions about her strange affinity for the shadows. But as conspiracies unfold within the collegium walls, and the body count rises, Mia will be forced to choose between love and revenge, and uncover a secret that could change the very face of her world.