Escaping from Houdini by Kerri Maniscalco 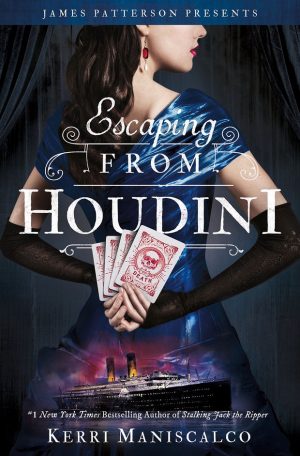 here we are also at the third volume of Kerri Maniscalco’s series, Escaping from Houdini. I’m done reading it right now so it’s fresh in my mind. I remind you that this too comes out on September 15th in italy, but it’s already available for preorder on the online stores and if you want also in your bookstores.

As I mentioned yesterday, this book is quite different from the other two. A first difference is the triangle that is created between Audrey Rose, Thomas and another character you will meet during the reading, Mephistopheles. But then also the title of the book itself because in the previous books the title indicated the name that had been attributed to the murderer, in this book instead there is the real Harry Houdini, master of escapology that we still know today.

Let’s start with the good parts of the book. One of these is that we are in a real historical period with characters also known as Jack the Ripper, Houdini, and amalgamated with the story there is the part invented by the author without traces of fantasy as I thought these books were before reading them XD. A very interesting part that I did not mention in the two previous reviews is the end of each book where Maniscalco reserves a few pages to explain what is true, who are the characters that really existed, the places, etc., and what she created instead.

I have to be honest in some ways in this book I liked Audrey Rose less. I really liked it when she wanted to be taught by Thomas how to get inside a murderer’s head, and also every time she helps with the investigation, but in this book she has proven to be one of those female characters that irritate the reader. Fortunately, this has not been the case throughout the book but it has happened more often than I like to admit. Between the scenes we have every time she is with Mephistopheles, and many other times also with Thomas where she makes the wrong decisions and says wrong things that in the other books she would never have said or done. For this book we return to the 4 stars, but even if I wanted to, I couldn’t give less for the development of the whole story is extraordinary.

Every murder is different, the investigations always differ from one book to another, and being a writer myself I can say that it is not easy to diversify when you are writing the same thing for many books, obviously Maniscalco, as well as Clare and all other authors who have written many books in the same environment are experts, yet it’s not easy stuff and they make it seem like the easiest thing in the world.

By the end of the second book, Audrey Rose’s uncle had gone to get them because they had a case to solve in the United States. They left Liverpool on the Etruria without ever imagining that the journey would prove anything but smooth and pleasant. Audrey Rose does nothing but fantasize about what her marriage to Thomas will be like and he uses every possible moment to be alone with her.

On the ship there is also a circus that will make a show every night, but it is precisely from the first evening of the show that the problems appear. One person is killed every night, mostly girls, and it’s Audrey Rose, her uncle and Thomas’s job to find out what’s going on and the reason for all those murders.

Obviously, as I told you before, many other things happen in the middle of the investigations, including Audrey Rose who makes a deal with Mephistopheles, also becoming an apprentice at the circus, her cousin Liza who ran away from home to be with Houdini and much more as only Kerri Maniscalco can do.

Reading these three books raised my curiosity, which I already had for some time, to read her new book, out on November 26 in English, which happens to be set in Italy in the 19th century, because apparently her great-grandmother was Italian, Sicilian, and immigrated to America. Apparently in the world all these authors are Italian hahaha.

And tomorrow the insta tour begins, don’t miss it.