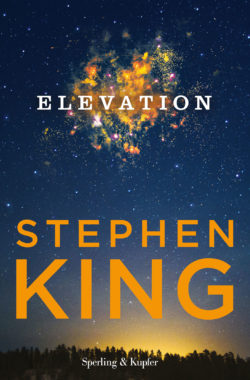 I finally read my first Stephen King’s book! Thanks Sperling & Kupfer for the copy sent to me of Elevation.

It took me longer than normal to write this review, but not because I didn’t like the book, in fact, but because being my first King’s book I had to understand what to write to best express my opinion.

This small book actually has a rather particular plot when compared with all the other books of this great author. Do you know how long it took me to read it? 1 hour and a half, by car, last week while traveling to Turin. This should help you understand that, despite the story has nothing more than a light plot – no horror, just a little paranormal – set in the place, as I understand it, preferred by King because he sets most of his books in, it is sliding in a crazy way. I know that some of King’s books are heavy, but if at least half of them are like Elevation by narration, perhaps I understand why his novels have a minimum of 500 pages, they practically read themselves.

In particular, for Elevation, I finished it right away because I wanted to get to the end and see if there was something more. All though, despite the “normal” story, I liked it a lot, much more than I expected since it was my first Stephen King book.

In the end, instead of being amazed by the complex storyline, I was amazed much more by the fact that the story told nothing more than the life of the protagonist and a particular thing that was going on in his life.

There was a twist at the end, and I hadn’t really expected it. A decision of the protagonist that neither I nor the other characters had seen coming.

Although Scott Carey doesn’t look any different, he’s been steadily losing weight. There are a couple of other odd things, too. He weighs the same in his clothes and out of them, no matter how heavy they are. Scott doesn’t want to be poked and prodded. He mostly just wants someone else to know, and he trusts Doctor Bob Ellis.
In the small town of Castle Rock, the setting of many of King’s most iconic stories, Scott is engaged in a low grade—but escalating—battle with the lesbians next door whose dog regularly drops his business on Scott’s lawn. One of the women is friendly; the other, cold as ice. Both are trying to launch a new restaurant, but the people of Castle Rock want no part of a gay married couple, and the place is in trouble. When Scott finally understands the prejudices they face–including his own—he tries to help. Unlikely alliances, the annual foot race, and the mystery of Scott’s affliction bring out the best in people who have indulged the worst in themselves and others.

I’d like to read something else by Stephen King, but I don’t know where to start, maybe The Outsider or Pet Sematary? What would you, knowing my literary tastes, would recommend me? Which one would be less scary?