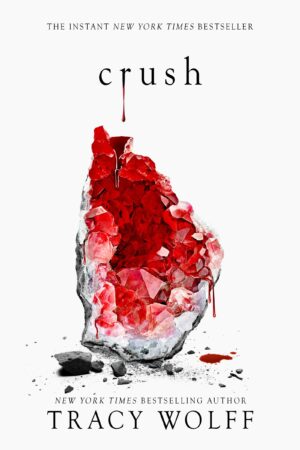 How are you? Just today Crush, a sequel to Crave by Tracy Wolff published by Sperling, is out in Italy, and I hope for you that you have already read the first volume and are ready for this second, because apart from being huge – which I thought was spectacular because I didn’t want to break away. from the pages – it is a real bomb and so I recommend you read it before everybody start talking about this, also risking to run into some unwanted spoilers.

What I will do are not really spoilers, they are things that happen at the beginning of Crush, but they could turn out to be spoilers if you have not read Crave, so maybe avoid reading the whole review. I tell you from here that it is absolutely worth it. It brings back the style of those fantasy of the past i loved so much, a smooth, flowing style, full of twists but without big morals behind and therefore more appreciable in fast reading, as they were in their time Shadowhunters, The Throne of glass, and other series as well. I also remind you that the series consists of Crave, Crush, Covet – released just over a month ago in English – and – still expected in America – Court which should also be the final volume out in September.

I confess that the first few pages of Crush had me a little confused. The first book ended with Hudson trying to kill Jaxon and with Macy turning to stone to protect her boyfriend. Now Crush starts with Macy apparently returning but at first I didn’t know what to think. Was it just Macy’s imagination in her stone state of hers, was it all in her mind? Or is it reality and without knowing how she got back to normal at Katmere?

Obviously everything is explained already from the second chapter, but things start to get more complicated. Macy starts doing things, then unable to remember how and when she did it, or why. Nobody can figure it out until they realize one thing. Nobody knew what happened to Hudson after Macy saved Jaxon. There were two possibilities, either he was gone forever or he was still around to regain his strength after 4 months in which Macy was left stone.

The truth was quite different though. They had always had him next to them to manipulate them without realizing it, but better late than never to understand, right? Obviously the goal now is to find the necessary elements to make him harmless and get rid of him forever. A few new characters come into play in this book, one of them being an ancient and merciless vampire who, however, helps Macy and Jaxon handle the situation they face.

But in reality the thing that intrigued me most during the reading was not being able to get rid of Hudson but the Ludares, a kind of games once used to be able to officially join the Order and now a game of strength, ruthless , in which our protagonists want to participate as this is the first year in which they can do so. I don’t know why they intrigued me so much but everyone’s been talking about it since almost the beginning of the book that I couldn’t wait to get to that point in the narrative. Games that also prove to be important for the mission.

There is a lot more to tell you, including the fact that I love the Jaxon-Macy couple so much and hated every moment Hudson got in the way, and I should also tell you something about Macy’s powers which, again, if you have read Crave you will have imagined. But the more I say the more there is the risk of spoilers. I conclude by saying that I am really enjoying the continuation of this story because I am always discovering new things such as the various powers that these creatures have, and the various factions that exist in this world, and also the various dangers that until now were just stories .