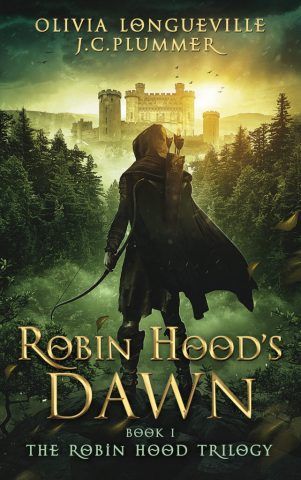 A KINGDOM UNDER ASSAULT, A CONSPIRACY BORN OF ANARCHY, AND A HERO STANDING AGAINST TYRANNY

A story birthed from both history and folklore— step into a unique retelling of the Robin Hood legend.

Set in 12th century England and France, a time of anarchy, intrigue, and turmoil, Robin Hood’s Dawn [Angevin World Publishing, January 16, 2018] by authors Olivia Longueville and J.C. Plummer offers readers a carefully crafted story blending real history with key elements of the Robin Hood legend. In an intriguing story that highlights Robin’s family background and dynamics like never before, readers will be undeniably enchanted as they follow Robin Fitzooth, a man falsely convicted of a shocking crime who finds refuge in Sherwood Forest and becomes Robin Hood. Leading a band of men against the injustices of a malevolent sheriff and his henchmen, Robin begins to unravel a web of treachery threatening the English royal family.

From the mists of an ancient woodland, to lavish royal courts teeming with intrigue, and the exotic shores of the Holy Land — Robin Hood leads the fight in a battle between good and evil, justice and tyranny, the future and the past.

Developed in a fast-paced storyline with elements of political intrigue, questionable morality, adventure, romance, suspense, and mystery, Robin Hood’s Dawn is part one of an enthralling three-part retelling of the legend of Robin Hood.

A timely and provocative read broadening the storyline of this well-known legend, Robin Hood’s Dawn reveals:

This wonderful book reminded me a lot of the TV show of Robin Hood who as protagonist had Jonas Armstrong, and is thanks to this TV show that I fell in love with the world of Robin Hood, an executioner who acted in a world where politics was unjust and tried to do everything for the poor, even risking his own life and that of his companions for them.

And even in the book we have this charming boy, of humble origins, and a village to be protected, that because of the hatred by the sheriff against him, always ready to blame him and even send him to the pillory, he is forced to flee.

In the forest he finds others outlaw like him, who help him. After a duel with Little John, at the head of these outlaws, he becomes the new leader, and the first thing he does, on a new moon night, is to go save Lady Marian from the clutches of the sheriff.

But as you know, the sheriff never gives up, and then there is Sir Guy who wants Marian for himself, because he claims to love her, and much more in this first part of a retelling of three parts.

The characters are very vivid, and strong, full of personalities, especially the character of Marian, who is not the usual damsel in distress, but someone who manages to get away alone and to protect herselve when Robin is not there.