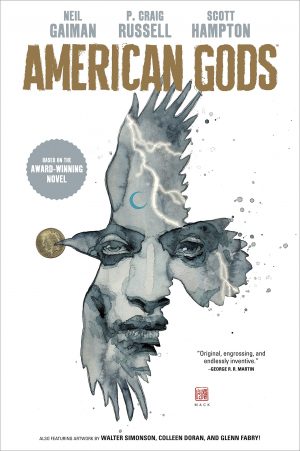 first of all thanks to Oscar Mondadori for providing me with the material for reading this trilogy. If you remember I had already talked about American gods in the TV series column some time ago. Today I’m here to tell you about the graphic novels written by the talented, as we all know by now, Neil Gaiman. More specifically today I am talking about the first graphic novel in an almost comparison of similarities with the Starz series.

But first I must say that this series surprised me. When I started watching the television series I would never have expected what it was and yet most of the time it was pleasant, which is why I also recommended it to you, and the graphic was even better.

It’s always nice to be able to explore different sides of a story while always staying close to what was being broadcast on television. The similarities between the two stories are many, but some scenes that are in the first graphic are only in the second season of the TV series – such as the carousel scene of the second season, or the story of the past of Shadow – and some scenes of the series I haven’t seen them yet in the first graphic.

Yet I was able to ascertain, apart from the similarity of the story, with the same identical beginning and events, that the characters also have the same personalities, the same ways of being and as unfortunately not very often happens, the same aspect whatever it is.

I had already ascertained Neil Gaiman’s prowess from many of his previous works including Norse Mythology, and even if graphic novels are quite different from a book made up of words only, they are equally complex to develop because each image must be well connected to the next with the right dialogue and I can say that this series has been very successful in this parameter.

And after all, although the story is somewhat bizarre, the old gods need followers, and Shadow is an integral part of this mission, his job is not just to chauffeur Wednesday back and forth. It all begins with the death of his wife but that is only the beginning, and the people he will meet on the way will be as bizarre as they are powerful and needy because in “extinction”, replaced by modernity.

It is almost like a struggle for survival of which Shadow Moon, our protagonist, does not yet know anything, and unaware of everything, he embarks on this adventure from which, even if he wishes, he will never be able to leave. Being together with Wednesday many times will prove dangerous but now it’s done, and alongside the main story there will also be the stories of the other characters that will create an all-round filling to allow the reader not to miss a single piece and continue reading until turning the last page to notic then that it has come to an end.

As a reading age I consider it an adult since some drawings mirror the red light scenes that we also find in the TV series, but other than that it is a story that could be read by anyone who likes the genre.