A Curse so Dark and Lonely by Brigid Kemmer 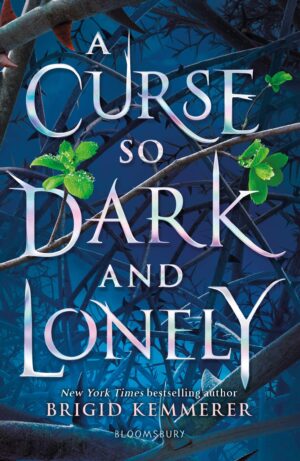 today, for Oscar Mondadori, the first title of a trilogy that I had been aiming for since it was first published is out. In those days I might have been able to read the arc, but stupid me, I never did, I had to wait years for it to be translated into Italian to convince myself to read it.

Anyway now here I am, on the day of its release in all digital bookstores and libraries, talking to you about A Curse so Dark and Lonely by Brigid Kemmer, retelling of Beauty and the Beast, with a wonderful cover  and from a very particular story because a mix between urban fantasy and high fantasy.

There would be a lot of things to say, but I see it hard to say everything without spoilers. But one question I asked myself is, why is the first book of the trilogy the longest and the other two shorter? Usually the opposite happens, that the story gets richer and richer as it progresses, right up to the end. I would not like to get ahead, but seeing this situation I would think that the story in the next volumes will be more hasty, but I hope it will not.

From a retelling point of view, however, I would say that the author did a good job. You see all the original elements of Beauty and the Beast but in a totally new and smooth version. Kemmer’s writing, with first-person narration, two POVs, at present, is light, interesting and not heavy at all.

Rhen is the Crown Prince of Emberfall. Over 300 seasons ago, he spent a night with Lilith, a power-hungry witch. After that night she cursed him, so at the end of each season – which always repeats the same as the previous one – he turns into a monster and ends up killing his subjects, his family, and sometimes even some of the girls that Gray brings for him.

Because, as in the original story, to break the curse, Rhen has to make a girl fall in love with him. Gray, his guard, has the task of taking a girl to the prince every season. In this last season Gray had found a girl, but Harper, who was on that same street, hears the scene and goes to the girl’s aid, eventually being taken to Emberfall herself.

As you can imagine, things are not easy, because Harper is not like other girls, she is tenacious and combative. But this will also be Rhen’s last season, the last chance to break the curse and save Emberfall. But if he doesn’t break the curse, he’ll forever become The Monster.

Yet this is not the only problem, because the queen of a neighboring kingdom wants to invade Emberfall. Rhen clearly has a lot on his mind, and once Harper agrees that he can’t go home, he’ll help Rhen at least protect his people from invasion.

This feels like the cruelest season of all, to present me with a girl with the fierceness to stand at my side – yet with a home and family she needs to return to so badly.

A lot happens in this 500-page book. However, there are some things that have not convinced me 100%. The love story should be the focus of the story, after all it is the only answer to break the curse, but many times it is neglected to make room for the subplot of the war. I discovered, around page 400, that there should be a love triangle in this book, but trust me when I tell you that this detail is almost non existent.

There is the ending, which could have been better developed, with more details, slightly longer in events. But what saves it is the last chapter, from Gray’s point of view, which leaves us with bated breath because it reveals a very interesting mystery that will certainly be developed in the next volumes.

Summing up. There is maybe a little something that would have been more interesting if done differently, but the retelling part was so interesting and the characters were so well defined that this book deserves 4 stars.